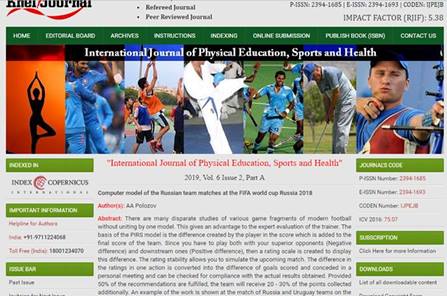 Abstract. There are many disparate studies of various game fragments of modern football without uniting by one model. This gives an advantage to the expert evaluation of the trainer. The basis of the PIRS model is the difference created by the player in the score which is added to the final score of the team. Since you have to play both with your superior opponents (negative difference) and downstream ones (positive difference), then a rating scale is created to display this difference. The rating stability allows you to simulate the upcoming match. The difference in the ratings in one action is converted into the difference of goals scored and conceded in a personal meeting and can be checked for compliance with the actual results obtained. The game consists of a sequence of diverse single combats (> 50 components) that end with a shot on goal. The balance of the won and lost single combats in each component in each pair of players is converted to the player’s rating for this component. The fact of winning single combat isn’t used in the calculation, but its cost does that means the expected change in the score in the case of winning single combat. The player’s rating for the game component exponentially falls from the number of single combats in this component in the course of the game. This allows you to pre-allocate the number of single combats in each component so as to win their largest number. Due to the stability of the rating estimation player’s ratings for all components can be obtained from the previous match. It is possible to calculate the most favorable arrangement for the team which the greatest number of single combats will be won in based on the distribution of the opponent’s activity according to the positions of the players and the components of the game and placement during the match. From the DB the algorithm generates the most advanced combinations in the attack and the most dangerous attacks of the opponent in the defense. The result of the work is the expected maximum possible score of the game which must be on the scoreboard when the players fulfill all the conditions. Existing Instat, Basket-stats, ICEBERG, LONGO Match PRO, FUTSALSTAT, etc. form the headache of a trainer from the statistics of past games. PIRS technology provides already calculated solutions for the best result of the upcoming match. The trainer will not be able to compete with PIRS, since the information pool called football is too large for one person. Therefore, the resource of the game in matches of different levels is used only by two thirds. Provided 50% of the recommendations are fulfilled, the team will receive 20 – 30% of the points collected additionally. An example of the work is shown at the match of Russia and Uruguay teams on the World Cup in 2018. The results of the study were provided to the RFU.